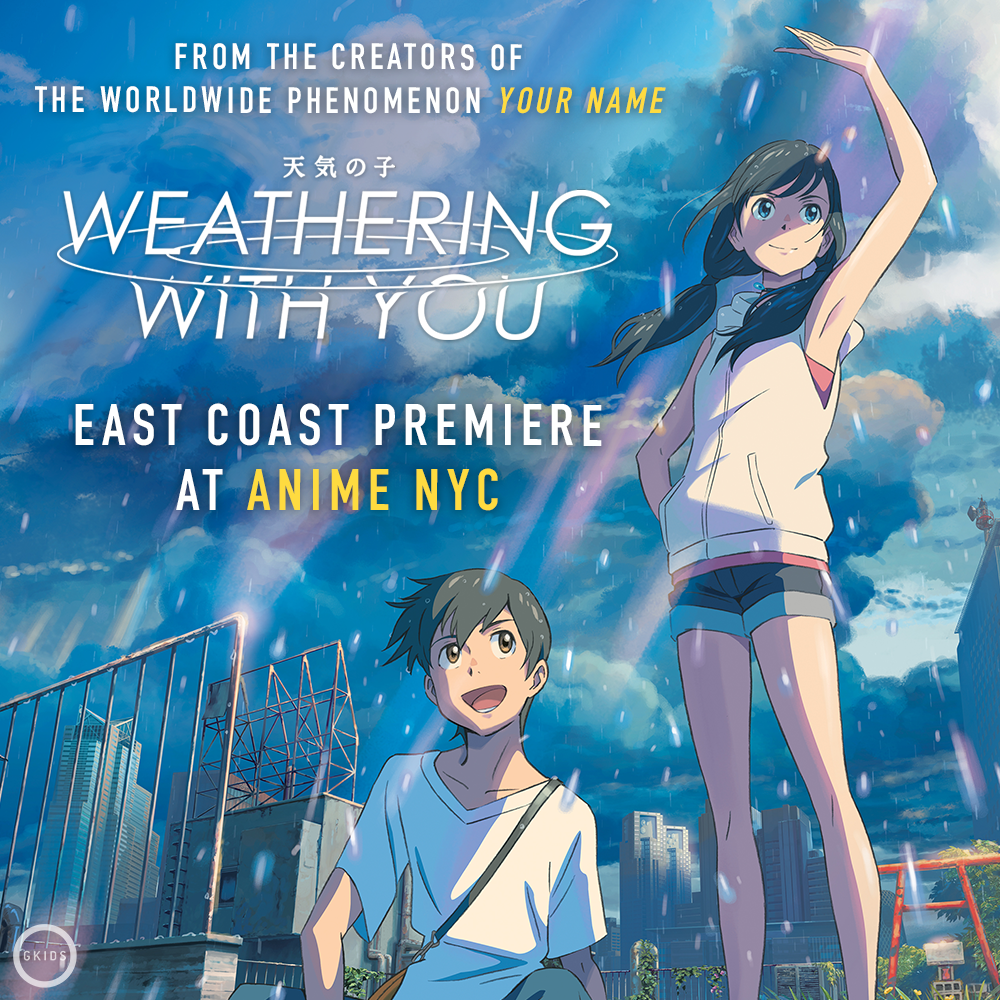 Ahead of its January 17 theatrical release, the highly-anticipated new film from director Makoto Shinkai and producer Genki Kawamura, the creative team behind the critically-acclaimed, global smash hit "Your Name" will be coming to this year's Anime NYC.

■ Director Shinkai
Makoto Shinkai is the visionary director behind "Your Name.", the 2015 worldwide phenomenon that is the second-highest globally-grossing Japanese film of all time and winner of awards across Asia and around the world, including Best Animated Film at the Los Angeles Film Critics Association Awards and Mainichi Film Awards; Grand Prize of Animation Division at the Japan Media Arts Festival; Screenplay of the Year at the Japan Academy Prize; and Best Film at the Crunchyroll Anime Awards.

"Weathering With You" is Shinkai's follow up and, continuing the legacy set by your name., is already the highest grossing film of 2019 in Japan; 13th highest grossing film of all time in Japan, surpassing movies including Toy Story 3, Finding Nemo, and The Wind Rises; and the first film in Japan since your name. to surpass 10 million tickets sold.

"Weathering With You" held its North American premiere at the Toronto International Film Festival, and the sold-out US premiere is at this weekend's Animation is Film Festival in Los Angeles. It will be presented for the first time in New York City at Anime NYC. The film will take place on the afternoon of Sunday, November 17 inside Anime NYC's Special Events Hall, a 2,000+ seat theater home to all of Anime NYC's most esteemed events.

Anime NYC will begin accepting RSVPs to "Weathering With You" in early November to allow fans guaranteed seats to this very special event. An Anime NYC weekend or Sunday badge will be required, but there is no additional cost to attend the Weathering With You East Coast Premiere.

Following Anime NYC, "Weathering With You" will be released in North American theaters on January 17, 2020, exactly two month later.

【 Synopsis 】
The summer of his high school freshman year, Hodaka runs away from his remote island home to Tokyo, and quickly finds himself pushed to his financial and personal limits. The weather is unusually gloomy and rainy every day, as if to suggest his future. He lives his days in isolation, but finally finds work as a writer for a mysterious occult magazine. Then one day, Hodaka meets Hina on a busy street corner. This bright and strong-willed girl possesses a strange and wonderful ability: the power to stop the rain and clear the sky…

✤ Anime NYC ✤
Anime NYC is one of the nation's largest anime, manga, and Japanese pop culture conventions. It will welcome over 40,000 attendees when it returns to the Javits Center for a third year from November 15 through 17, 2019, and it will showcase major screenings and premieres across the anime world including Keep Your Hands off Eizouken!, Code Geass: Lelouch of the Re;surrection, and Gundam: Reconguista in G, capped off by Shinkai's "Weathering With You".


✤ GKIDS FILMS ✤
GKIDS is a producer and distributor of award-winning feature animation for both adult and family audiences. Since 2010, the company has scored an astounding 11 Best Animated Feature Oscar nominations with The Secret of Kells in 2010, A Cat in Paris and Chico & Rita in 2012, Ernest & Celestine in 2014, The Tale of the Princess Kaguya and Song of the Sea in 2015, Boy and the World and When Marnie Was There in 2016, My Life as a Zucchini in 2017, The Breadwinner in 2018, and Mirai in 2019. GKIDS also handles North American distribution for the famed Studio Ghibli library of films, one of the world's most coveted animation collections with titles Spirited Away, My Neighbor Totoro, Princess Mononoke and others. GKIDS also produces the annual LA-based film festival, ANIMATION IS FILM, which embraces the highest aspirations of animation as a cinematic art form and is a vocal advocate for filmmakers who push the boundaries of their work to the fullest range of expression of which medium is capable. For more, visit GKids.com.


✤ ANIME NYC POWERED BY CRUNCHYROLL ✤
Anime NYC powered by Crunchyroll is New York City's anime convention! A showcase of the best of Japanese pop culture in the biggest city in America, Anime NYC brings anime fans and publishers together for three days of unique exhibits, exclusive screenings, extensive panels, and appearances by some of the biggest creators in Japan. This year's event takes place November 15-17 in New York's Javits Center, where you can join over 40,000 fans for a celebration of Japanese animation, manga, cosplay, movies, food, fashion, travel, technology, toys, and games in the heart of NYC!